Remember when Led Zeppelin was just Jimmy Page struggling to keep the band The Yardbirds alive? Oh oh, remember that time Dave Grohl played his heart out in an audition to join this tiny garage band called Nirvana? (He sure does: https://i.imgur.com/lTpuIG6.jpg)

I went out for drinks the other day with a few really cool dudes from a local band by the name of The Antique Hearts. We were just hanging out playing pool, having a few drinks, when Zach, the lead singer, mentioned to me that people don’t appreciate growth anymore.

Now, obviously he didn’t mean that like “nobody appreciates when you grow up” but more like “nobody appreciates the process of growing up” anymore. It caught me off guard at first, but the more I thought about it, the more I realized the truth in his statement. In today’s society, we reward those who have the quickest solutions, the fastest answers, and the most efficient ways of getting from point A to point B. We reward those who grow up the fastest and leave one of the most valuable times of growth in our lives behind. In doing so, we’ve lost our appreciation for those who aren’t afraid to fail on their paths to success.

When was the last time you told yourself that it’s OK to be bad at something? When was the last time that you told yourself that you have to start small before you can make it big? It’s really not something most of us consciously think about. I’m certainly guilty of expecting greatness of myself without thinking I needed to put the work in. I surround myself with people that are better than me at coding, at socializing, at arbitrary different things, because I hope to learn from them. It’s easy to get discouraged when I look at them and see what I’m not, but that’s not the right way to look at it. Not at all. I have to make a conscious effort to look at these people who I want to learn from, and see my future self in them, and take small steps to get there.

It’s no different for aspiring musicians. If you think that you’re just going to pick up a piano and become the next Beethoven or Mozart by the end of the day, then you aren’t ready for the journey. There are different ways of going about beginning, but the key is that you don’t quit just because you aren’t where you wanted to be yet. On top of that, where you want to be will always change. There will always be people and things in your life that change your goals and who you want to become. But if you don’t appreciate where you came from and the process it took to get where you are now, then you’re going to find it very difficult to get where you want to be.

Look back at your past and think about something that you wish you had kept up with, but quit because you weren’t as good as your idol, or as talented as your favorite athlete, or as outgoing as your favorite actor/actress seems to be. It’s possible that in your rush to get old and mature as fast as possible, you saw what you wanted to be but convinced yourself you would never become that, so you quit. If that is the case, maybe it’s time to take a second look, see if you can’t start taking the small steps towards becoming what you always wanted to be, while remembering that failing along the way isn’t just acceptable, it’s encouraged. 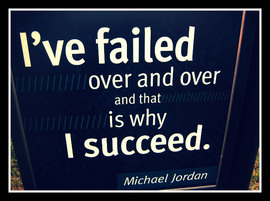 Can you think of something in your life that would be much better if you or someone else had simply taken the time to grow a little bit more before attempting something? Let me know!